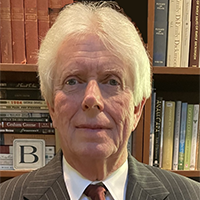 Bill Gifford is a native of Atlanta.  He attended Mercer University School of Law.  He was engaged in the private practice of law in Macon for many years and also served as a federal prosecutor and Senior Litigation Counsel with the United States Department of Justice.  During his career, Gifford was president of the Macon Association of Criminal Defense Lawyers and an arbitrator/mediator for the United States District Court Middle District of Georgia.  He has been a member of the Macon Bar Association and the William Augustus Bootle Inn of Court.  In 2008 Gifford was named by the Macon Bar Association as its Lawyer of the Year.

Gifford is married to Bonnie and has three sons, two of which are attorneys in Atlanta.