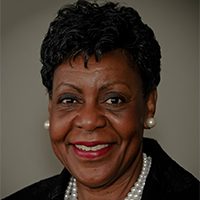 Sylvia Williams McGee, a native of Macon, is a community engagement volunteer who seeks to serve in helping to make the Macon-Bibb County Community a better place to live. She currently serves as Secretary  of the Macon – Bibb County Land Bank Authority; Immediate Past President of The Macon (GA) Chapter of the Links, Incorporated; Chair of the Ruth Hartley Mosley Memorial Women’s Center and President  of the Advisory Board of Directors for Leadership Macon and Chair of the Grants Committee for the Community Foundation of Central GA.

Sylvia received a Bachelor of Arts from Tift College (1974) and a Masters of Social Work from the University of Georgia (1976).

Sylvia has received several awards and recognition such as Georgia School Social Worker of the Year (1998); Robert Hatcher Leadership Award (1996) and Outstanding Leadership Award for Jack and Jill of America, Inc. (2000).  Most recently the Teacher of Excellence Award given at the Golden Eagles Ceremony has been named in her honor (2020)

In 2011, after 35 years of service, she retired from the Bibb County School District.  There she served as School Social Worker, Director of Student Support Services and Deputy Superintendent.  She also served one year as  Interim Superintendent (2010 -11)

Sylvia served as Project Manager with READ UNITED with United Way of Central Georgia (2016 – 2020).  In the program, which was funded by AARP Foundation and the Peyton Anderson Foundation, volunteers are recruited and trained to tutor students in Kindergarten  – through third grade with the goal of having students reading proficiently by the end of third grade.

She is married to Terry D. McGee, a retired accountant and she is the mother of two adult children, Terese L. McGee and T. Dwight McGee, Ph.D.  She is the grandmother of triplets .  She is a third generation member of New Hope Missionary Baptist Church.