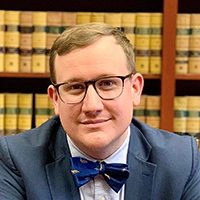 Eric Z. Edwards is the Chief Assistant District Attorney for the Houston Judicial Circuit, charged with prosecuting primarily felony offenses committed against children in Houston County. Over the past decade, Eric has worked as a lawyer in every office within the Houston County Superior Court complex, serving briefly as a judicial staff attorney and as a public defender in addition to his prosecution experience.

Eric has spent several years serving on the executive board of the Houston County Bar Association and in various capacities with the Georgia Bar’s Young Lawyers Division. He is also the chairman of the Planning Commission for the City of Perry, a role which he sometimes enjoys even more than lawyering.

A graduate of Georgia Southern University and then the Georgia State University College of Law, Eric and his wife, Ashleigh, reside in Perry with their two young daughters and two old dogs.